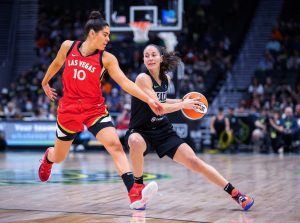 Bird, who has announced this will be her final season, passed former Minnesota star Lindsay Whalen.

Jewell Loyd led Seattle (12-7) with 24 points, and Breanna Stewart had 14 points and seven rebounds. Stephanie Talbot added 15 points and Bird had 13 points and six assists. Tina Charles scored four points in her debut for the Storm.

Wilson had a double-double in the first half with 11 points and 11 rebounds to help Las Vegas lead 47-44.