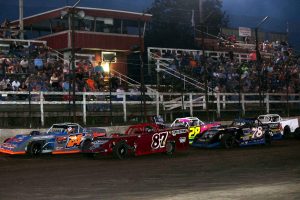 (Macon, IL) Macon Speedway is ready to go for Saturday night’s 95Q/Dynagraphics Firecracker 40’s presented by Decatur Area Convention & Visitors Bureau. Six divisions will race with special 40 lap races for the Decatur Building Trades Big 10 Pro Late Models and BillingsleyRewards.com Big 10 Modified. A fireworks display will light up the sky toward the end of the night.

Headlining the event will be a 40-lap feature event for the TOPLESS BillingsleyRewards.com Big 10 Modifieds. The class will be running for Macon, Big 10, and national points all while running without the roof of the cars in the annual topless event. The race will pay $800 to win and $125 to start. Macon Speedway and Big 10-point leader, Rodney Standerfer, of Sullivan, IL, leads the field of Mods into town. Austin Lynn, Guy Taylor, Alan Crowder, Jarrett Stryker, and Tim Luttrell are others to watch as they fend off a hungry field of challengers.

The Decatur Building Trades Big 10 Pro Late Models are also ready for a 40-lap event paying $800 to win and $125 to start. Much like the Modifieds, one driver leads the Macon and Big Ten standings. That driver is Warrensburg, IL’s Dakota Ewing. Ewing has claimed Big 10 wins at Lincoln and Macon and will be looking for his third Saturday. Jose Parga, Blaise Baker, Rockett Bennett, Colby Eller, Dalton Ewing, and Ryan Miller are others fighting for top spots.

The DIRTcar Pro Mod class has veteran Guy Taylor, of Springfield, IL, at the top of the standings. Taylor has won four of the seven features, while Kevin Crowder sits second in points. Zach Taylor, Maxx Emerson, and Matt Milner round out the top five in points, entering Saturday’s event.

The point battle in the 51 Bistro Street Stock division is extremely close, much like last week’s exciting finish in the feature race. Terry Reed leads the standings over Bobby Beiler by just two points. Beiler finished second last week by mere inches as he made a great run on the inside lane challenging Nick Macklin for the win. Another exciting finish might be in store for Saturday’s action. Saturday’s race will be the final tuneup for the Street Stocks before next Saturday’s Bruce Dulgar Classic.

Jeremy Reed leads the points in the DIRTcar Hornet division by 30 over Tristin Quinlan. Reed has won three of the eight features this season but has had a bad luck streak as of late. Following the pair are Billy Mason, Taryn Page, and Brady Reed.

Rounding out this Saturday’s racing will be the Micros by Bailey Chassis. A lot of familiar young drivers are at the top of the standings with Aarik Andruskevitch, John Barnard, Hayden Harvey, Daryn Stark, and Collin Shain among them. The five teenage drivers have been strong all season.

At or toward the end of the racing program, a firework display will be held to celebrate the Independence Day holiday. 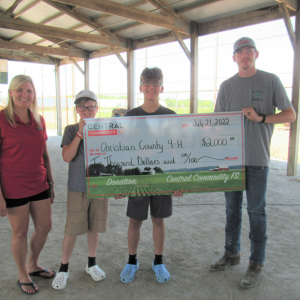