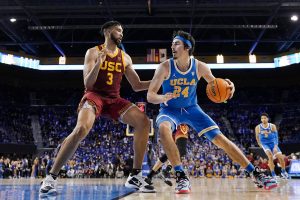 FILE – UCLA guard Jaime Jaquez Jr., right, tries to get by Southern California forward Isaiah Mobley during the second half of an NCAA college basketball game on March 5, 2022, in Los Angeles. UCLA and Southern California are planning to leave the Pac-12 for the Big Ten Conference in a seismic change that could lead to another major realignment of college sports. A person who spoke to The Associated Press on Thursday, June 30, 2022, on condition of anonymity because the schools’ talks with the Big Ten have not been made public said the schools have taken steps to request an invitation to join the conference. (AP Photo/Mark J. Terrill, File)

Conference realignment in college sports has been going on since 1984, when the Supreme Court invalidated the NCAA’s national television contract for football.

The conference juggling has gone through ebbs and flows through the years since, from small schools bumping up to bigger leagues to power programs switching to other major conferences.

The latest move, Southern California and UCLA bolting the Pac-12 for the Big Ten, could be part of a tectonic shift. Not just because of the marquee schools involved, but because it happened at a time when the NCAA is looking to take a more decentralized approach to governing college athletics, handing more power to schools and conferences.

“You might think this is more seismic because it’s involving wealthier schools — and arguably it is — but also it’s seismic because of the underpinnings of the system, the foundations of the system, are being challenged at a time when the financial structure is exploding,” Smith College economics professor Andrew Zimbalist said Friday. “It may have larger ramifications, but it is a process that’s been ongoing.”

The decisions by USC and UCLA to join the Big Ten in 2024 come roughly a year after Texas and Oklahoma announced they were leaving the Big 12 for the Southeastern Conference.

While surprising, even to Pac-12 officials, the announcement Thursday gives the Los Angeles schools stability and exposure in a shifting collegiate sports landscape.

“It’s huge for our student athletes, just from a national exposure perspective,” UCLA athletic director Martin Jarmond said. “They’re going compete at the highest level in a major elite conference in different time zones. UCLA is always national, but now we have the ability for student athletes to showcase their talent across the country. That’s exciting.”

The SEC has become a college football behemoth that distributed $54.6 million to each of its member schools in the 2021 fiscal year. The Big Ten has tried to keep up and had a per-school distribution of $46.1 million last year.

The Pac-12 had the lowest distribution number among Power Five schools, paying its member institutions $19.8 million in 2021.

At the core, it’s all about the TV.

The SEC has a $3 billion deal with ESPN that’s set to kick in in 2024 and the Big Ten is currently negotiating a massive media rights deal. The Pac-12 has floundered when it comes to TV as the conference’s network has struggled to gain footing while many of its games are played late at night.

With costs to run college athletic programs have climbed in recent years, exacerbated by the pandemic, moving to an even bigger conference provides more financial stability. For the Big Ten, adding UCLA and USC gives the conference a foothold in the nation’s second-largest media market.

“Money talks,” said Tom McMillen, President and CEO of Lead1, which represents Football Bowl Subdivision athletic directors and programs. “I was on the board of regents when Maryland jumped in to the Big Ten and there were all kinds of arguments about it was academics and it was this and that, but ultimately it came down to money. I think that’s the same case here.”

The defections will create two mega conferences that will hold the majority of power and money, leaving the rest of leagues scrambling to keep up.

The tiering could stratify even more if the SEC and the Big Ten continue to expand, which could be the next step.

The future power structure could consist of two, maybe three mega conferences of up to 20 schools at the top, with the Power Five joining the Group of Five conferences in the tier below but still above the Football Championship Subdivision.

More schools in the Pac-12 and Big 12, along with the ACC, could look to bolt for more stability.

Conferences losing members likely will face two options: combining with another league to form a mega conference of their own or expand on the current membership. The Pac-12 it plans to take the expansion route, issuing a statement on Friday that said it is exploring all expansion options.

“You have exploding costs on one end and your revenue sources are being decimated, which is a tremendous pressure,” Zimbalist said. “On the other hand, what do you do? Well, something pretty radical I think is going to have to happen.”

Uncertainty is the only thing that’s certain at this point.