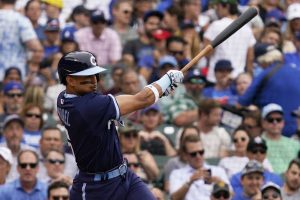 CHICAGO (AP) — Christopher Morel got a belt-high pitch and launched it toward Waveland Avenue for a long two-run homer.

Another big moment for the rookie from the Dominican Republic. And he’s had a few lately, whether he was delivering at the plate or in the field.

Morel homered in his third consecutive game, and the Chicago Cubs rallied to beat the Boston Red Sox 6-5 on Friday.

The Cubs took advantage of 10 walks by five pitchers and came back after falling behind 4-0.

Morel came up big again when he launched a tying two-run drive to left against Hansel Robles (1-3) with two out in the sixth.

Willson Contreras then walked and scored on a wild pitch by Jake Diekman to Nico Hoerner to make it 6-5 and cap a three-run inning. That sent the Cubs to their fourth win in five games.

Morel playing a big role is becoming the norm for the Cubs.

He had five hits in Thursday’s romp over Cincinnati. He also went deep Wednesday and made a terrific throw from center field to nail a runner at the plate and help lift the Cubs to an 8-3 win over the Reds.

Against Boston, he started at second base. And as far as he’s concerned, that’s just fine. He’ll play wherever manager David Ross wants.

“That’s why I work on it every single day. Every position,” Morel said. “Anywhere they need me, that’s what I’m there for, the team. Wherever they need me, I’ll be there.”

The Red Sox looked ready to roll to an easy win after going 20-6 in June.

Jarren Duran, back in the lineup for Boston after missing a three-game series at Toronto because he’s unvaccinated, drove the game’s first pitch from Adrian Sampson to the center-field bushes for a home run.

Jackie Bradley Jr. made it 4-0 with a three-run double in the second. Rich Hill breezed through the first four innings before exiting with a sprained left knee in a three-run fifth.

Hill, who debuted with the Cubs in 2005, gave up three runs and three hits in 4 2/3 innings. He walked four and struck out three.

Hill appeared to be shaking his leg at one point in the fifth and was visited by an athletic trainer. The 42-year-old left-hander exited after hitting Patrick Wisdom to load the bases with two out.

Tyler Danish came in and walked Rafael Ortega, cutting the gap to 4-3.

Hill said he “felt great” prior to the fifth

“Unfortunately, I put us in a tough position, and that’s what makes me sick to my stomach,” Hill said. “But overall, before that point, the ball was coming out well.”

Sampson gave up five runs and eight hits in 5 1/3 innings. Brandon Hughes (1-0) got three outs and earned his first career win, and David Robertson worked the ninth for his 10th save in 13 chances.

The Cubs wore dark blue uniforms with “Wrigleyville” on the front for their first game against the Red Sox at Wrigley Field since 2012. The teams met at Fenway Park in 2017.

Red Sox: LHP Chris Sale (rib) will make at least one more minor league rehab start before the Boston Red Sox decide if their ace is ready to join their rotation after being sidelined all season. Sale struck out seven over four innings for Double-A Portland on Thursday. Cora said his mechanics were sound in his third rehab outing and he felt “physically great.” The 33-year-old left-hander is scheduled to pitch for Triple-Worcester on Wednesday.