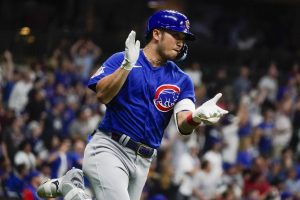 Chicago Cubs’ Seiya Suzuki reacts after hitting a two-run home run during the fifth inning of a baseball game against the Milwaukee Brewers Tuesday, July 5, 2022, in Milwaukee. (AP Photo/Morry Gash)

MILWAUKEE (AP) — Seiya Suzuki has wasted no time getting back into the swing of things since coming off the injured list.

Suzuki homered for the second straight night and had three RBIs as the Chicago Cubs overcame Kyle Hendricks’ early exit to defeat the Milwaukee Brewers 8-3 on Tuesday.

Suzuki ripped a pitch well off the inside corner for a tiebreaking, two-run shot in the fifth inning. That came one night after he hit an inside-the-park homer in the ninth to give Chicago a 2-1 lead, though the Cubs lost 5-2 in 10 innings. The team activated Suzuki from the injured list Monday after a sprained left ring finger caused him to miss about five weeks.

“He looks really comfortable,” Cubs manager David Ross said. “The timing’s back, to me. I think Seiya’s looked as good as he started.”

The Cubs needed power from Suzuki and precision from their bullpen to overcome the loss of Hendricks, who left after three innings with a sore right shoulder. He threw 69 pitches, with his velocity slightly lower than usual.

Hendricks said he felt fine before the game but could tell as soon as he threw his first warmup pitch at the start that something was off. The Cubs’ pitching staff already is at far less than full strength with Marcus Stroman, Drew Smyly, Wade Miley and Alec Mills on the injured list.

“No point in pushing it,” Hendricks said. “It’s not something that’s so bad that it’s going to get out of control, but it’s just not great. Something I’ve definitely got to get checked out to see what it’s all about.”

Most of Milwaukee’s offense came on Rowdy Tellez’s two-run homer off Hendricks in the first inning. Tellez’s last 10 hits have gone for extra bases, tying a Brewers record Ryan Thompson set in 2002.

After starter Jason Alexander (2-1) held Chicago scoreless for the first three innings, the Cubs totaled eight runs over the next three frames to turn a 2-0 deficit into an 8-2 advantage.

The Cubs scored a run in the fourth without hitting the ball out of the infield. After they loaded the bases on a walk, a hit batter and an infield single, Patrick Wisdom scored from third when Nelson Velázquez grounded out.

Chicago pulled ahead with three runs in the fifth.

The rally started when Brewers shortstop Willy Adames fielded a one-out grounder and threw wildly to first, allowing Nico Hoerner to reach second on the error. Hoerner scored the tying run when Ian Happ hit a grounder that got past third baseman Luis Urías and went into the left-field corner for a double.

Suzuki then lined a first-pitch sinker and sent it just to the right of the left-field foul pole.

The Cubs extended the lead to 8-2 in the sixth as Rafael Ortega drove in two runs and knocked Alexander out of the game with a triple into the right-field corner. Ortega scored as part of a double steal with Happ. Suzuki’s single to left brought home Happ.

“We didn’t play good enough defense to keep some runs off the board early, and then we sent him out there for the sixth and unfortunately that inning just kind of fell apart on us,” Brewers manager Craig Counsell said.

Milwaukee loaded the bases when Swarmer opened the sixth inning with three straight walks, but the Brewers failed to capitalize. Wick took over and retired Urías on a liner and Jace Peterson on a double-play grounder.

Cubs C Willson Contreras was out of the lineup after leaving in the 10th inning Monday due to hamstring tightness. Ross said Contreras is day to day.

The three-game series concludes Wednesday afternoon as Corbin Burnes (7-4, 2.36 ERA) pitches for the Brewers and Adrian Sampson (0-0, 3.38) starts for the Cubs in a matchup of right-handers.