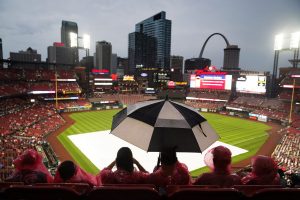 Fans sit in the stands after a scheduled start of a baseball game between the St. Louis Cardinals and the Chicago Cubs Wednesday, Aug. 3, 2022, in St. Louis. The game has been postponed due to weather and the two teams plan to play a doubleheader on Thursday. (AP Photo/Jeff Roberson)

ST. LOUIS (AP) — Wednesday’s game between the Chicago Cubs and St. Louis Cardinals was postponed by rain, allowing the Cardinals to line up their newly fortified starting rotation.

St. Louis added four pitchers in deals over the last several days, including left-hander José Quintana, who will make his Cardinals debut in the second game of Thursday’s day-night doubleheader. The twinbill was scheduled because of the rainout.

Then, on Saturday, left-hander Jordan Montgomery will make his first start for St. Louis against his former team, the New York Yankees, who dealt him to the Cardinals on Tuesday for outfielder Harrison Bader.

Cubs: LHP Wade Miley allowed three earned runs in 2 1/3 innings of a rehab start at Triple-A Iowa on Wednesday. He struck out two and walked two. Miley has been out since June 11 with a left shoulder strain.