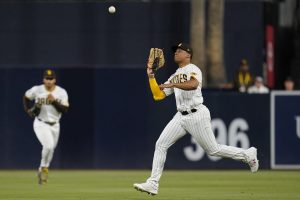 SAN DIEGO (AP) — The sellout crowd came to cheer Juan Soto in his first game with the San Diego Padres. It went bonkers when Brandon Drury hit a grand slam on the first pitch he saw with his new team.

Feeding off the energy of Soto and the crowd, the new-look Padres routed the Colorado Rockies 9-1 on an electric Wednesday night at Petco Park. The crowd of 44,652 was animated even before the game started, and gave Soto a standing ovation as he ran out to his position in right field in the first inning, and then again when he came to the plate in the bottom of the inning. He drew a walk to start a five-run rally that was capped with Drury’s grand slam.

“It feels very cool. It brings a lot of emotions for me,” said Soto, the 23-year-old generational talent whose acquisition along with Josh Bell in a blockbuster trade with Washington gave a jolt to both the team and the city. “It feels amazing how they cheered for me. They gave us the energy to go out there and play hard.”

Manny Machado, who has carried the Padres most of the season, homered leading off the fifth and finished a triple short of the cycle in San Diego’s fifth straight win. Jake Cronenworth had a two-run shot. The big beneficiary was left-hander Blake Snell (4-5), who struck out nine in six innings and won his third straight start.

The Padres unveiled their new-look lineup with Soto batting second and Bell hitting cleanup a day after they were obtained Tuesday in one of the biggest deadline deals ever. Drury was also obtained on Tuesday, from Cincinnati, and put a charge into the already festive atmosphere with a grand slam off Chad Kuhl with one out in the first

Soto walked, Machado doubled and Bell walked to load the bases before Cronenworth was hit by a pitch to bring in Soto. Drury then drove the first pitch he saw from Kuhl into the seats in left-center and the fans went nuts. It was his second career grand slam and 21st homer this season.

Drury said he went out to stretch 25 minutes before the game “and the fans were just going nuts. I was out there warming up and I was just like pumped up, ready to go. It was definitely an amazing day.”

During the pre-game hitters’ meeting, Melvin told the players, “It’s going to be like this. It really has been all been all year. When you bring in guys like this, it takes it to a different level. We just wanted to let them know that this is going to be pretty cool.

“Before we even took the field it was,” Melvin said “It seemed like the place was packed even before the game started. It was rare.”

Melvin said Soto “seems to bring some energy. You see him backing up first base on ground balls; there’s just a lot he brings to the table. Obviously on base, what he does swinging the bat. The fans seemed to embrace very quickly. He’s just one of those guys who has a lot of energy around him and I think everybody felt that today.”