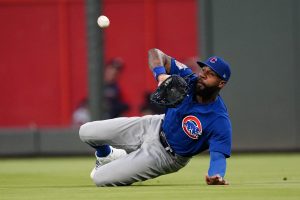 FILE – Chicago Cubs right fielder Jason Heyward makes a diving catch on a fly ball by Atlanta Braves’ Austin Riley in the third inning of a baseball game April 28, 2021, in Atlanta. The Cubs will cut ties with Heyward after this season, ending one of baseball’s most expensive and unproductive free-agent signings with a year left on his contract. (AP Photo/John Bazemore, File)

CHICAGO (AP) — The Chicago Cubs will cut ties with right fielder Jason Heyward after this season, ending one of baseball’s most expensive and unproductive free-agent signings with a year left on his contract.

“We’re not going have him with the team next year,” Cubs President of Baseball Operations Jed Hoyer said Monday. “We’ve already talked to him about that. We want to give him the full offseason to find an opportunity. For us, given where we are as a group and where we’re likely going to be in the corner outfield next year, with Seiya (Suzuki) in (right field), we’re going to move in a different direction.”

Heyward, who turns 33 on Tuesday, signed a $184 million, eight-year contract before the 2016 season but has batted only .245 with 62 home runs in seven seasons with the Cubs.

He famously rallied teammates with an inspirational pep talk during a rain delay late in Game 7 of the 2016 World Series in Cleveland. Chicago went on to win 8-7 in 10 innings, ending a championship drought that dated back to 1908.

Heyward is hitting .204 with one home run and 10 RBIs in 137 at-bats this season. He’s been on the 10-day injured list since June 27 because of right knee inflammation.

After releasing Heyward this winter, the Cubs will still owe him $22 million for the final year of his contract. Once he clears waivers, any team can sign him at the minimum major league salary.

“I think he’s a great sounding board for the guys, but Jason and I have talked about where things are going in the future,” Hoyer said. “For next year, we’re not going to have him as part of the team. We’ll go our separate directions at the end of the year and give him a chance to have that full offseason to find a job.”

Heyward was a regular on the 2016 Cubs team that won the World Series and was praised for that famous speech to teammates during Game 7.

He won Gold Glove awards in 2016 and 2017 for his defensive excellence in right field, but his offensive production has steadily dipped. That regression, combined with the addition of younger corner outfielders, put Heyward’s future with the Cubs in doubt.

“He doesn’t like it but understands where we are,” said Hoyer, who indicated Heyward wants to play.

In other news, the Cubs claimed outfielder Franmil Reyes off waivers from Cleveland. Reyes batted .213 with nine homers, 28 RBIs and a .603 OPS in 70 games with the Guardians this season. He struck out 104 times in 263 at-bats.