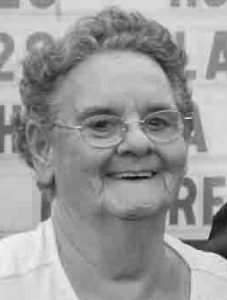 Alice L. Simmons, 83, of Illiopolis, formerly of Mt. Auburn, passed away August 10, 2022 at Memorial Medical Center in Springfield, Ill. Alice was born March 26, 1939 to Benjamin Franklin Wright and Lucinda Pearl Wright. She married her high school sweetheart, Earl Simmons Sr. on November 29th 1958. They remained married for 53 years until his death in 2012. Alice worked for the State of Illinois. She started in the Department of Revenue where she helped develop and implement tax codes still in use today. She later worked for the Department of Public Health before retiring from the Department of Vital Records. Alice was baptized as one Jehovah’s Witnesses on April 5, 2008. She was a member of the East Springfield Congregation where she became beloved as a genuine sister and mother to all. Alice was a devoted mother and grandmother. She would gladly admit she would have skipped straight to the grandkids if she knew how fun it was. She always made time for the children and made sure she cheered the loudest. She made everyone feel loved and special. To know her was to love her.

Alice is survived by her sister Marie Clifton Morrison of Michigan, children: Sue (Harry) Harter of West Virginia, Rose Beaston of Mt. Auburn, Earl (Jill) Simmons Jr. of Assumption and son-in-law David Loyd of Illiopolis, as well as 15 grandchildren, 43 great grandchildren and 4 great-great grandchildren. She is also survived by numerous nieces and nephews, special nieces Shirley (John) Mattingly and Pam Palmer of Oklahoma and Janet Oyler of Michigan. Alice was preceded in death by her husband, her parents, her sisters Wanda and Earlene, and her daughter Linda Loyd.

Memorials can be made to Alice’s church: East Springfield Congregation 3076 Normandy Rd. Springfield, Ill., 62703
Sutton Memorial Home in Taylorville is assisting the family with arrangements.
Please sign our online guest book at suttonmemorialhome.com