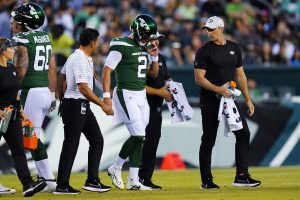 New York Jets’ Zach Wilson is taken off the field after an injury during the first half of a preseason NFL football game against the Philadelphia Eagles on Friday, Aug. 12, 2022, in Philadelphia. (AP Photo/Matt Rourke)

PHILADELPHIA (AP) — A knee injury to Zach Wilson in Friday night’s preseason game against the Philadelphia Eagles has turned the Jets’ high hopes for their second-year quarterback into concern.

Wilson hurt his right knee in the first quarter of the Jets’ 24-21 preseason victory. After going back to pass with 4:29 left in the period, Wilson was flushed out of the pocket and scrambled to his right for 7 yards, but went down after the play. He appeared to injure his knee when planting to cut on Philadelphia’s grass field.

After being checked by trainers, Wilson limped to the sideline on his own power before heading to the locker room.

After the game, Jets coach Robert Saleh said the initial tests on Wilson showed the ACL “is supposed to be intact,” but the team is waiting for the MRI on Saturday.

“I’m always concerned until you get the final evaluation,” Saleh said.

Philadelphia quarterback Jalen Hurts looked sharp, completing all six of his pass attempts for 80 yards and a touchdown while playing just one series.

There is optimism this year for the 23-year-old Wilson, who was drafted No. 2 overall last year. He had an up-and-down rookie season, throwing nine touchdowns and 11 interceptions in 13 games, but went without an interception in his final five games.

Wilson was shaky in his first series against Philadelphia’s starters, going 1 for 3 for 10 yards with an interception. Eagles linebacker Kyzir White stepped in front of Wilson’s intended pass for wide receiver Corey Davis and returned it 27 yards to the Jets 20 on what appeared to be a poor read by the New York quarterback. Wilson’s first pass of the game was a badly thrown out-route intended for rookie first-round pick Garrett Wilson.

Wilson struggled with accuracy last season, ranking last in the league in completion rate (55.6%) and passer rating (69.7). His decision-making and accuracy had looked better this summer during training camp.

Before his injury, Wilson was sharper in his second series, albeit against Philadelphia backups. He connected with tight end Tyler Conklin for 4 yards and then hit wide receiver Elijah Moore for 9 yards, finishing 3 for 5 for 23 yards and an interception.

On the play in which he was hurt, a first down from the New York 42-yard line, Wilson faked a handoff to running back Michael Carter on a play-action pass play but was forced to scramble after defensive lineman Tarron Jackson beat right tackle Max Mitchell around the end.

With Eagles first-round rookie defensive tackle Jordan Davis in hot pursuit, Wilson tried to juke past linebacker Nakobe Dean but went down after being barely touched by Dean.

Asked if Wilson should have run out of bounds, Saleh said, “One hundred percent.”

Saleh stood nearby while trainers attended to Wilson.

“He got a little greedy there,” Saleh said.

“He’s in good spirits, a little frustrated obviously,” Saleh said. “As good as you can be in this situation.”

Saleh said he uttered “a lot of swear words” when Wilson went down. The Jets coach didn’t blame the injury on the turf, but mentioned it was new sod that he said was just laid down on July 29. He said the issue with new sod, which he said can be loose, is determining the proper cleats to wear.

It’s the same knee that Wilson suffered a sprained PCL in Week 7 against New England last year. He was sidelined four games before returning and playing the rest of the season.

The Jets also have 37-year-old quarterback Joe Flacco, but he was not in uniform for the game as a handful of veterans did not play in the preseason opener.

“Joe is a phenomenal football player,” Saleh said. “He’s having a great camp.”

Jets fourth-stringer Chris Streveler, a 2019 Grey Cup champion with the CFL’s Winnipeg Blue Bombers, threw two TD passes, including a go-ahead 5-yard toss to Calvin Jackson Jr. with 16 seconds left. Streveler, who previously spent time in the NFL with Arizona, Baltimore and Miami, had not taken a snap in offensive team drills in camp this summer before playing against Philadelphia.

Unlike Wilson, Hurts got out of the game apparently unscathed — though he took a vicious helmet-to-helmet, out-of-bounds hit by linebacker Quincy Williams that left Philadelphia coach Nick Sirianni livid.

Said Sirianni: “I was more mad at the situation, not Saleh.”

Hurts popped right up after the play.

After making the playoffs in the first season under Sirianni last year, there is great hope in Philadelphia for more progress this season. The hottest topic in town is whether Hurts can elevate his game to a level that would allow the Eagles to make a deep playoff run.

A second-round pick, Hurts is entering his third season and second as a full-time starter. He showed his dual-threat ability last season, passing for 3,144 yards and rushing for team-bests of 784 yards and 10 touchdowns. But he was 26th in completion rate (61.3 percent) and 22nd in passer rating (87.2), and his accuracy and arm strength have been targets for skeptics. An up-and-down training camp only has fueled the ire of Hurts’ doubters.

But Hurts came out firing on all cylinders in his first opportunity to show his progress in a live games after an offseason full of work, hitting wide receiver Quez Watkins for 28 yards down the right sideline on the game’s first play. He connected with his next four passes before finishing a perfect passing drive with a 22-yard touchdown strike to tight end Dallas Goedert.

“We talk about the importance of explosive plays and we came out of the gate with an explosive play,” Hurts said. That can get a drive going.”

Hurts looked impressive without even targeting his new No. 1 receiver, A.J. Brown, whom the Eagles acquired in a draft-day trade with the Tennessee Titans and promptly signed to a four-year deal with $57 million guaranteed.

Hurts’ lone drive wasn’t without concern, though, as he was leveled with a hard hit from Williams despite being clearly out of bounds after scrambling for no gain. Williams was flagged for unnecessary roughness, and Sirianni tore off his headset and screamed toward the Jets bench while standing nearly 20 yards on the field.

Philadelphia’s opening drive wasn’t a good sign for a revamped Jets defense that finished 2021 last in total defense and scoring defense, 30th in pass defense and 29th against the run. New York made several additions to bolster its defense, including selecting cornerback Sauce Gardner No. 4 overall and defensive lineman Jermaine Johnson No. 26 in the first round of this year’s draft. But the Jets defense put up little resistance to Hurts and the Eagles.

Eagles RB Miles Sanders caught two Hurts passes for 20 total yards during the opening drive. Pass receiving is an area of improvement for Sanders, who is in the final season of a four-year deal. He has rushed for 2,439 yards and nine touchdowns in 40 games.

Former Eagles defensive linemen Trent Cole and Hugh Douglas will be inducted into the club’s hall of fame on Nov. 27 when they host the Green Bay Packers, the team announced. Cole had 85½ sacks in 10 seasons with the Eagles, and Douglas had 54½ in six years.

Jets: OL Conor McDermott (left ankle sprain) is out 1 to 2 weeks. … RT Mekhi Becton was sidelined after suffering a knee injury in practice that is expected to cost him the season. Becton, a 2020 first-round pick, missed all but the first game last season after dislocating his right kneecap and suffering cartilage damage in the opener.

Jets: Host the Atlanta Falcons in the second of their three preseason games on Aug. 22 in preparation for the season opener on Sept. 11 against Baltimore.

Eagles: At the Cleveland Browns on Aug. 21 in the second of three preseason games to get ready for the season opener on Sept. 11 at Detroit.