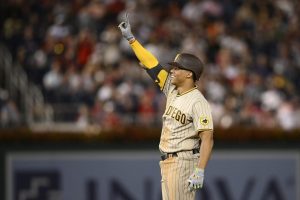 San Diego Padres’ Juan Soto gestures at second after he doubled during the fifth inning of the team’s baseball game against the Washington Nationals, Friday, Aug. 12, 2022, in Washington. (AP Photo/Nick Wass)

WASHINGTON (AP) — On a night when Juan Soto was celebrated by his old team, his new team was more concerned about a player who wasn’t there — Fernando Tatis Jr.

Soto had two hits and got a standing ovation in his return to Washington, and the San Diego Padres beat the Nationals 10-5 on Friday night after Tatis was suspended 80 games for a positive drug test.

“This is a blow for us,” San Diego manager Bob Melvin said. “We’ll have to move on. I’m glad we made the moves we did over the deadline.”

Soto, one of the best hitters in baseball at age 23 and a World Series champion in 2019 with Washington, was traded to San Diego on Aug. 2, a deal that became even more significant when the Padres learned Tatis would miss the rest of the season and the first 32 games next year. He tested positive for Clostebol, an anabolic steroid he said he took inadvertently as part of a medication.

San Diego holds the third NL wild-card spot, and general manager A.J. Preller said during the game that Tatis’ suspension doesn’t change his expectations for the season, although he added the team’s trust in Tatis has waned.

“If Tatis comes back, maybe this offense picks up without all those deals, but we weren’t counting on that,” Preller said. “So I think now looking back on it it’s probably more important the deals went down.”

San Diego players said they felt the team is strong enough to contend without Tatis, though they were taken aback by the news.

“Obviously it’s terrible to hear,” third baseman Manny Machado said. “Hearing that he’s going to get suspended for 80 games and not be a part of what we’re trying to accomplish here is something you don’t want to hear before a game and don’t want to hear overall. It’s just a terrible thing.”

Soto has reached base in every game with the Padres. He just missed his second homer with San Diego when he doubled off the right-field wall in the Padres’ seven-run fifth inning. He singled later in the inning to drive in Austin Nola.

Soto also hit a 390-foot flyout to the warning track in center in the eighth.

But all the postgame discussion revolved around Tatis’ suspension. One of the most dynamic players in baseball, Tatis hasn’t played this season because of a broken left wrist, an injury that’s believed to have occurred in an offseason motorcycle crash.

“Very disappointed,” Clevinger said. “It’s the second time we’ve been disappointed with him. You hope he grows up and learns from this and it’s about more than just him right now.”

Less than two weeks after he was traded, the Nationals welcomed Soto back with a highlight package, and Soto thanked Washington fans in a prerecorded video he put together Aug. 7. He received a standing ovation during his first at-bat.

“Pretty cool,” Soto said. “It was a pretty exciting moment for me.”

Soto said he was happy to see his “teammates” again before quickly correcting himself to say “ex-teammates.”

Bell also got hearty cheers when he came to the plate in the first inning. He went 0-for-5.

Nationals: SS Luis García was removed before the eighth inning after sprinting to first. He went 2-for-3. … LHP MacKenzie Gore (left elbow soreness) played catch in right field with an athletic trainer before the game. … RHP Tyler Clippard (groin) was reinstated from the 15-day injured list. … LHP Jake McGee was activated. … RHP Andrés Machado and Mason Thompson were optioned to Triple-A Rochester.