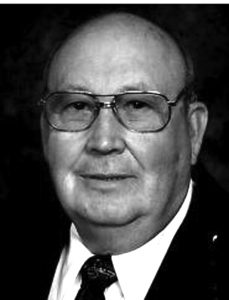 Daniel R. Cook, 96 of Carlinville passed away at his home surrounded by his family on October 27, 2022.

Daniel is preceded in death by his parents, 12 siblings and a son Vernon England, a daughter in law Margie Cook, a son in law Roy Schwartzraber, great granddaughter Katie Cook and granddaughter Shannon James Cook.

Daniel grew up in rural Edinburg, IL, he joined the Army and served our country in WWII. He farmed and worked for Fiat Allis for many years. He became a owner operator/truck driver and received recognition after 25 years of service and safety in the million mile club. He retired in 1994.

His pride and joy was his family.

After retirement they found their winter home in Zapata Texas, which they enjoyed for many years.

Daniel was a member of the American legion post 554 and a member of Emmanuel Baptist church.

A visitation will be held on Monday; October 31 2022 from 9-11 am, at Emmanuel Baptist church in Carlinville. The funeral service will be held at 11:00 am at the church with Rev Cliff Woodman officiating. He will be laid to rest at Prairie Lawn Cemetery, in Carlinville.

Davis-Anderson Funeral Home, Carlinville is in charge of arrangements.