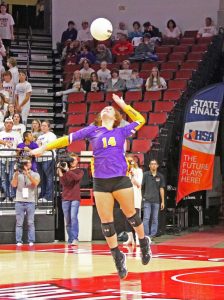 NORMAL — THS Libero Sam Logue serves the ball during the first set of the Class 3A State Semifinal match against the Nazareth Academy Roadrunners. The senior went on to end her night with 4 digs, 2 service points and 1 assist.

NORMAL — The home of the Illinois State Redbirds became a temporary home for the State semifinal match between Taylorville High School and Nazareth Academy . The Tornadoes fell to the Roadrunners in a two-set Semi-Final match on Friday, Nov 11. This was Taylorville’s first ever IHSA State appearance for Class 3A volleyball and the nerves got to them as their opponent shined a few shades brighter and advanced to the State Championship, 25-19 and 25-13.

“I just wish we would have given them a better game.” Head Coach Kim Peabody stated. “But you never know how high school girls are going to react in that situation.”

The Tornadoes came out with confidence in their abilities, as they should, but quickly fell apart in set number one. Gong down 4-10 early put them at an uphill climb. The defense of the Roadrunners definitely wasn’t something to ignore but Taylorville needed to focus on their own play a little too much.

“We weren’t passing well enough to be able to put the ball down against them,” Peabody said. “And they were. We were on defense the whole time.”

A mid-game score of 19-15 was the closest the Tornaodes came all match long to tasting a set victory at State.

Nazareth continued to pour it on in the second set. The Purple and Gold got down and the score seems to jump in multiplication, 4-1, 12-4 and finally 25-13.

“I just don’t think we did anything that great tonight.” Stated Coach Peabody. “Usually our strengths are passing the ball, being scrappy all over the floor, picking everything up but we just didn’t have that energy tonight.”

This was a match that, if able to, Peabody and these girls would play again in a heartbeat.

“We just need to pick up that energy and get this one out of our head.” Sophomore Mazie Fleming said after the loss. She went on to notch 4 kills in the contest.

“I feel like today definitely lit a spark under us. Hopefully we’ll go out tomorrow bigger and better.”

The THS setter finished with 13 assists, 5 digs and 1 kill.

It was obvious that Nazerath had a game plan. They kept Taylorville’s big hitter, Elle Richards, to just five kills and a serving point. Addison Tarr ended with 3 kills and an assist. Senior Xena Fisher put up just three points of service while Olivia Woodward had just two service points and a kill.

They felt like a shell but being that they were the only public school in the tournament they should be proud of themselves. However, these girls are starving for a victory and everyone can see that, most of all coach Peabody.

“Im hoping that they will get some rest tonight and be ready for that third place game tomorrow.”

They played against Joliet (Catholic Academy) for third place on Saturday, Nov. 12. More information on that game will be in the Monday, Nov 14 edition of the Breeze-Courier. 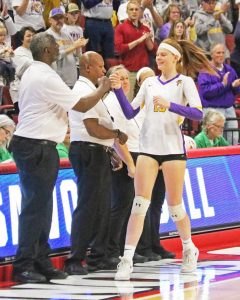