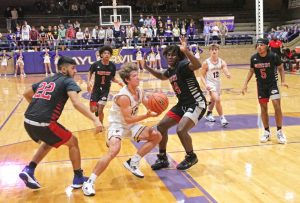 TAYLORVILLE — Sophomore guard Drake Howard drive through Warriors traffic with determination on his face. He lead the team in scoring on Tuesday night coming away with 13 points.

TAYLORVILLE — The Dolph Stanley court saw its first boys basketball match of the 2022 season when Taylorville hosted the Warriors from Granite City on Tuesday, Nov 22. Despite the crushing 67-35 season opening loss to Springfield High just the night prior the Tornadoes laced up and took the floor. However, they fell just three points short of victory to their Red and Black opponent, 46-43 the final.

“We fought really hard.” Head Coach Ryan Brown said after the undoing. “I thought this was a gutty performance from our guys. After getting humbled last night by Springfield High, to come back 24 hours later and have a pretty good high school game for the second day of the season.”

Both teams played proficient, especially for only being the second game of the young season. Sophomore guard Drake Howard lead the team in scoring with 13 points. Six of which he scored in the third quarter alone. He was 2 of 3 at the free throw line.

The first half blended with the second in this one. No one team could pull too far ahead from the other.

“All and all It was a pretty good game for November, for both teams.” Brown stated. “I was very happy we bounced back with some great energy good fight. I thought our defense was so much better tonight.”

Jake McConnell lead the charge on the defensive side of the ball. Standing strong the junior forward held his assignment to just 3 points. He also notched a point himself shooting 1-2 at the line. Aiding on that side of the ball as well was sophomore Baron Odam who was also the teams main rebounder.

The size difference wasn’t felt quite as much as it was on Monday but Coach Brown says they have to give maximum effort to make up for the lack of inches.

“We have to be scrappy or else were gonna get smoked.” He said with a joking yet serious undertone. “Im pretty happy with that. I thought Myles Clayton just had one of the guttiest performances.”

The senior, Clayton, put himself in the position to make plays on both sides of the ball. His night ended with 10 points. He went 4-5 at the free throw line and supplied the energy to this team.

“He is not one hundred percent right now and just fought to the very end.” Brown stated proudly. “He wanted to guard their best player and you could just see the pain on his face as he was digging down with every last bit of energy and strength. These guys have guts. We will win games just with this gutty effort alone.”

The two senior shooters, Will Bitschenauer and Will Turvey, combined for 17 points. Will B. shot and made four shots from beyond the arch and Will T. went 100% from the free throw line.

“We have to do things a little different than we have the past few years.” said Brown. “We’ve had a good mix of outside game and inside game. Now, we’ve got to play great defense, we have to box out one hundred percent of the time. Obviously gotta stick some threes and we’ve gotta play a little bit faster than what we have, the last couple seasons anyway.”

Taylorville drops the home opener to Granite City, 46-43. They start the season with an 0-2 record and will face off against the Triad Knights on Friday, Nov 25. Tip off for the THS vs THS matchup will be at 6:30 at Troy High School.

“He has been at every single home game that I’ve coached here.” The Head Coach stated. “Just didn’t quite have the same feel for me. Best wishes to Frank and we hope to see him at a game this season.”

Puffenbereger one frame shy of perfection