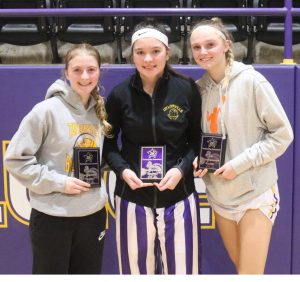 TAYLORVILLE — The 28th annual Taylorville Holiday Tournament concluded on Saturday, Nov 26. After more than a week filled with varsity girls basketball the championship game came down to a battle between the Tornadoes and Rochester Rockets. The non-conference matchup was an absolute brawl which went into overtime and came down to one final shot. Taylorville slipped up, made a few tiny mistakes and eventually fell to their visiting opponent, 53-52 the final.

Taylorville came out and set the tone immediately with 6’4 sophomore Mazie Fleming snagging the tip off. The Tornadoes offense exploded in the first quarter outscoring the Rockets 13-6. With their opponent visibly frustrated the home team poured on the points. Junior guard Aubrey Kietzman scored 12 points in the first half including three 3s. Her night finished with a team high 19 points.

Sophomore offensive threats Kyleigh Heimsness and Lia Champley put up a combined 8 points. Heimsness found herself playing a tad too aggressive however and would foul out later in the fourth quarter.

The Tornadoes finished the first half with a dominant display of defense suffocating Rochester and making them feel their presence with every shot they took. Both teams went into the locker room with very different attitudes toward the game, 24-14 halftime score.

Nothing changed when the ladies came out of the locker room. Everything was going positively for Addison Tarr and the Taylorville girls. Tarr was finding easy buckets inside, blocking shots and snagging rebounds. The sophomore finished with 15 points in the contest. Speaking of sophomores grabbing boards no other player did it better than Mazie. She was a force down low and inside finishing with 7 points, several blocked shots and added stellar defense as well.

“I thought we did a good job defensively.” Head Coach Hayden Eldred stated after the match. “They made a good little run there and we got stuck on 45 points. That happens. That’s the game of basketball.”

Rochester’s drive proved to outweigh Taylorville’s consistency. After scoring just 14 points in the first half the Rockets surged and scored 31 in the second. The Tornadoes were gassed but they weren’t just going to lose that easily.

The teams found themselves in overtime. Taylorville just needed to fix a few simple mistakes and hit their shots consistantly. Kietzman hit a three to really get the crowd into it. Senior sniper Alyvia McCullough hit her only shot of the game but it wound up being the most vital giving the Tornadoes a 52-49 lead.

Rochester took the lead with 8 seconds to go. Taylorville, needing to score, draws up a play to get from the opposite end of the court to the basket. Tarr drove to the hoop, drew a foul and visited the line for the one in one free throw shot. The sophomore missed the shot, Rochester snagged the board and that was all she wrote. Rockets defeat Tornadoes and were crowned Taylorville Holiday Tournament champions in 2022 53-52 the final.

“The girls did a good job of getting in there and keeping us in it until the very end.” Eldred said. “We played really well as a team. Defensively, we did what we wanted to do. As a team I’m just really proud of how they played.”

The Tornaodes will enjoy the short but much needed break then jump right back into the regular season with an away game against Effingham on Tuesday, Nov. 29. Tip-off for the Apollo Conference matchup will be at 7:30 p.m. 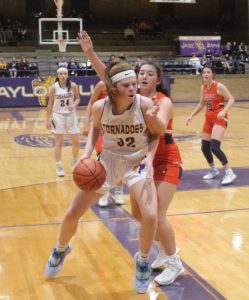 TAYLORVILLE — THS 6”4’ sophomore Mazie Fleming says “GET BIG”. She went to work offensively, defensively and on the glass on Saturday putting up 7 points and plenty of rebounds and steals.