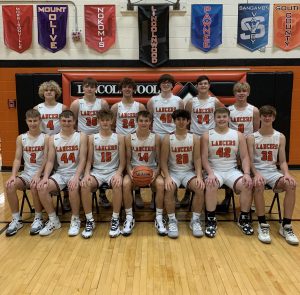 RAYMOND — Two seniors, three juniors and many sophomores with experience at the varsity level make up the Lincolnwood boys basketball team for the 2022 winter season.

“There is no question our “team identity” will always be Defense-Desire-Discipline.” says Head Coach Matt Millburg. “This year’s team could potentially be one of the best defensive teams we have had in recent years.”

His coaching journey began by chance during his tenure in school.

“The main catalyst driving me into coaching was my experience being asked to be a volunteer assistant coach in Lincolnwood’s junior high program during my college years.” Said the veteran mentor. “I then fell in love with it, which lead me into my working career as an educator.”

He is thankful everyday to have spent the last eleven years at the helm of a program he is mighty connected to and proud of.

“Getting the opportunity 11 years ago to coach my alma mater was a dream come true. I believe we have developed a very consistent & successful program in those years.”

Millburg, who is going into his 11th season as the Lancers Head Coach, was pleased with the milestones met and the way his team finished in the previous season.

“Last season was a success for us, as we went above .500 which was a team goal. We lost a lot to graduation and were extremely young.” Millburg comments. “Our younger guys really stepped up and had a great defensive year. We finished the last half of the season really well and had a competitive post season run.”

The two seniors, Baden Whalen and Zake Guzman, are both ecstatic for the upcoming season but for vastly different reasons. Whalen looks to continue his captain roll and earn MSM All-Conference team for the second consecutive year. While Guzman is coming off a knee injury which sidelined him for all of last season. The Lancers lost senior Will Jenkins who was looked at as leader last season. Both Whalen and Guzman will play key roles in the success of this basketball team.

The youth of this team will be tasked with learning, growing and soaking up all that they can.

“We are pleased that all eight of our sophomores are returning for their second season in our program.” Coach Millburg says. “Also, this will be the most freshman we have had in our 11 years with nine freshmen joining the team.”

There are a few key games and tournaments these young men are looking forward to but the teams main focus is to bring home some hardware.

After meeting with the team, our main goal is to win a post season plaque.” Millburg states. “This team is gearing toward a regional championship. Our tournaments are always extremely competitive and we know it will prepare us for our post season experiences.”

The Lancers currently hold the record of 1-3. They participated in the New Berlin Turkey Tourney all through last week in which they earned a sixth place finish and Braden Whalen earned a spot on the All-Tournament team.

Steady improvement throughout the season is much expected as well and a playoff run. Coach Millburg ends with words of encouragement and gratitude for the 2022-’23 .

“With the competitiveness and energy of practices recently, we are really looking forward to an exciting season. Thank you to all the media and fans for supporting us throughout the season.”