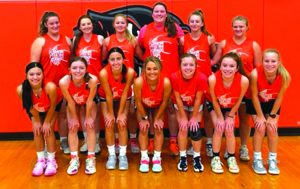 (PANA) — After a record-setting season and a third place finish in the IHSA Class 2A State Basketball Tournament, the Pana Panthers girls basketball team face the future with a new coach at the helm.

Coach Jan Braden, a coach with 22 years of coaching experience, takes the reigns from Brent McKinney whose 2021-22 squad set a season record school record, going 36-2 and finishing third in the state.

“I have 22 years of coaching experience at various levels with boys and girls basketball. This is my first year as the Pana varsity coach, Coach Braden said. “I had became involved with children’s youth programs and really enjoyed it so I decided to get certified and work my way through the coaching ranks. Pana had a great season last year placing third at state in Class 2A. I was not there for that season but I can tell that the girls are wanting to continue that type of success.”

The Panthers are 6-1 this season, having finishing second in their own Thanksgiving Tournament last week. The coach says defense will be the hallmark of this year’s squad.

“I believe we will be an extremely good defensive club with the ability for multiple players to be the leading scorer on any given night,” said Braden.

The coach will have seven seniors and ironically, that’s how may seniors departed after last year.

“The team lost seven players from last year’s roster including all-stater Jillian Hamilton but return Anna Beyers who was a starter on that team and will be a key member of this year’s team,” she said. “Anna Beyers and Morgan Beyers have been named this year’s captains and will be leaders with plenty of help from our other seniors. Jessica Vaughn, a junior, didn’t see a lot of varsity minutes last year but will be a vital part of our defense. We also have two freshmen, Kennedy Bowker and Reagan McGlaughlen challenging for varsity minutes. There are several more underclassmen that keep pushing the upperclassmen to get better.”

The loss of talent from last year is something not lost on the coach, but her expectations and those of her team are still high.

“Although we lost a big group of seniors from last year, we still have seven seniors back that didn’t play a ton of minutes last year that are hungry to show what they can do this year and lead this team into a deep post-season run” Braden said.

The Panthers look forward to hosting their own Pana Thanksgiving tournament and are excited to get to the Riverton High School Christmas Tournament of which they are defending champion.

“Of course, Taylorville is a natural rivalry being this close in distance to each other,” said Braden. 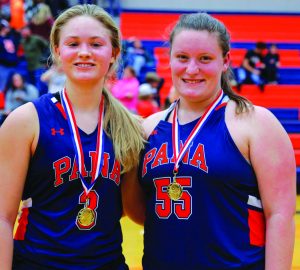