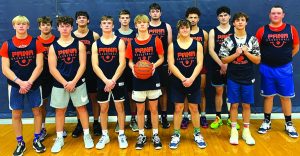 (PANA) —  This year’s edition of the Pana High School boys basketball team wants to continued on the success of last year’s team which set a school record with 29 wins and just four losses. Head Coach Adam Metzger will employ a few wrinkles in the offense and defense which will hopefully spark this team.

Metzger, now in his seventh season (112-63), says the defense will be the year’s team identity.

“We are changing some things this year and hope to fly around and be disruptive on that end of the floor,” said the coach. “Last year was a special year for us. We tied the school record for wins at 29-4. The season didn’t end the way we wanted in the sectional, but the guys gave everything they had every day. This year’s team should take a lot from how that senior class prepared, held each other accountable, and were relentless in their effort.”

The Panthers will rely on a half-dozen senior players who he hopes will lead the way.

“Devon Peebles and Max Lynch are very good basketball players who are capable of giving many teams issues from all three levels,” Metzger said. “Ace Armstrong is a player who is a great athlete and will impact the game on both ends of the court. Brant Bowker is a high IQ player that knows his role and excels in it. His vocal presence will be needed. Parker Ruot and Brycen Mahnke are new on the varsity scene, but they have varsity-level size and will contribute around the basket.”

He points to Peebles and Lynch as his key players this season.

“Both of them started games for us last year as juniors and were major contributors on both ends of the floor,” said Metzger. “We lost five seniors who were part of one of the best senior classes Pana basketball has had. Their leadership and playing ability will be missed, but the hope is that the younger classes were able to learn many things from them.”

Several underclassmen will be expected to contribute to this team as well.

“Ethan Hicks is one of the best players in our program and is recovering from surgery. When he returns to the court, other teams will instantly know his name,” Metzger said. “Clayton Worker is able to handle the ball and score from deep. We have five sophomores on varsity – Hayden (Blackwell), Matt (McFarland), Brayden (Carlson), Isaiah (Harbert) and Wyatt (Kile) – who will all see varsity playing time and will play extremely valuable minutes.”

The coach is anticipating some great basketball this season with some perennial rivals.

“Key games throughout the year include many of our area opponents such as Central A&M, Shelbyville, Nokomis and Taylorville,” he said. “Those games bring great crowds and a great atmosphere for high school basketball. Tournament-wise, we always look forward to the Vandalia Holiday Tournament. It’s a great midpoint check for us.”

Along with some talented players, Metzger has experience along with him on the bench.

“I am thankful for the great staff of coaches that we have in our program who bring tons of experience and are great representatives of Pana Basketball – Coach (Mitch) Cloe, Coach (Rich) Gibson, Coach (Gary) Bowker, Coach (Derek) Ade and Coach (Derek)Bourke,” he said. “The changing of personnel does not change the expectation of our program. This is something that we are constantly relaying to the guys.”

And, Metzger is looking for more results than just “X’s” and “O’s.”

“Ever since I was in high school I knew that I wanted to coach in some capacity. The experience so far has been very rewarding,” Metzger said. “I greatly enjoy all of the wins and the competitive nature of the coaching experience. Not much beats the rush of preparing, executing, and winning a big game! However, what I enjoy more is watching young men grow as people who become great community members, husbands and fathers. I try to instill life-long lessons and characteristics that they can use the rest of their lives. That’s always the goal.”